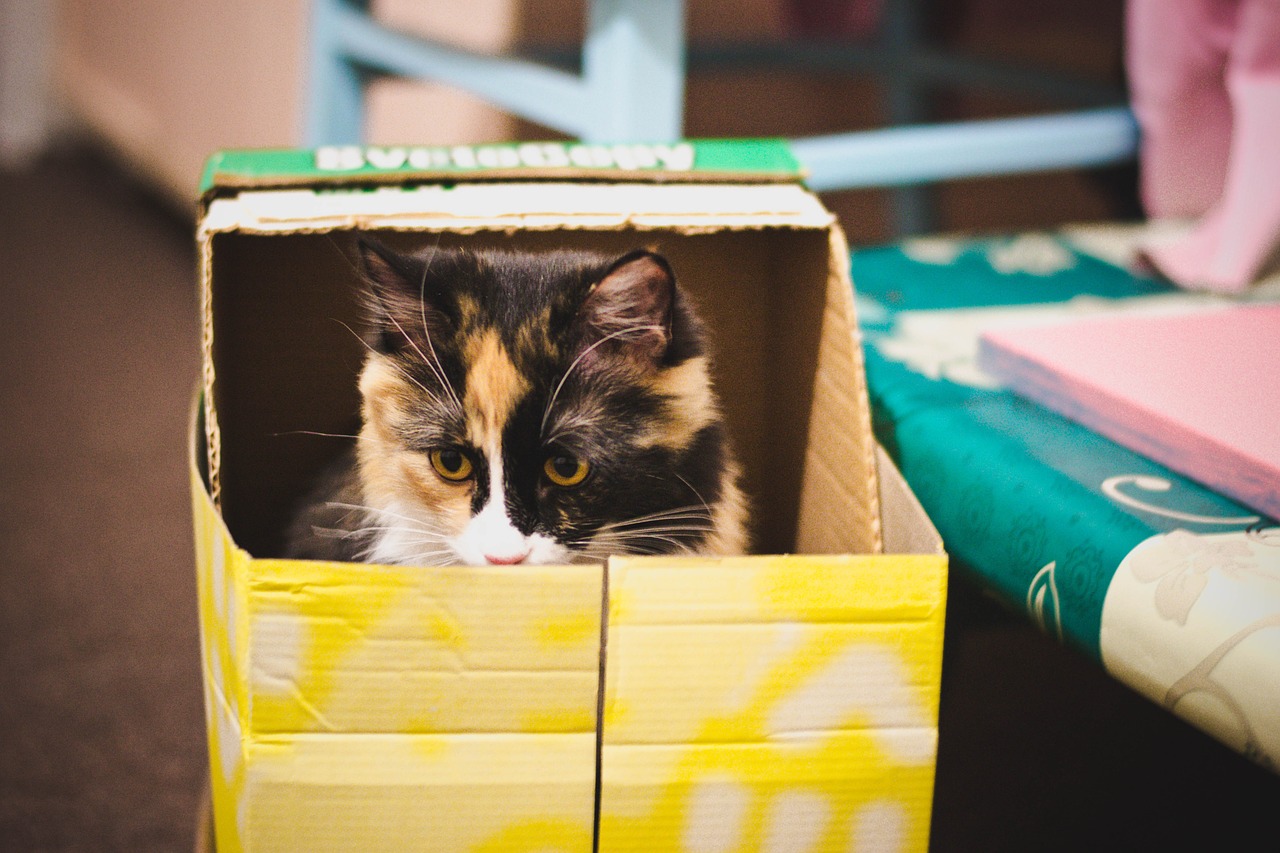 TAKE HEART FELINE enthusiasts. Your cat’s continued indifference toward her new Deluxe Scratch DJ Deck may be disappointing, but there is an object that’s pretty much guaranteed to pique her interest. That object, as the Internet has so thoroughly documented, is a box. Any box, really. Big boxes, small boxes, irregularly shaped boxes—it doesn’t matter. Place one on the ground, a chair, or a bookshelf and watch as Admiral Snuggles quickly commandeers it.

What’s Up With That?
Each week, we’ll explain the science behind a strange phenomenon that you may be wondering about, or may be hearing about for the first time right here. If you’ve seen or heard of something you’d like us to explain, send us an email. View the entire collection.

The Funky Chemistry Behind Wet-Dog Smell

Why It’s So Hard to Catch your Own Typos

So what are we to make of the strange gravitational pull that empty Amazon packaging exerts on Felis sylvestris catus? Like many other really weird things cats do, science hasn’t fully cracked this particular feline mystery. There’s the obvious predation advantage a box affords: Cats are ambush predators, and boxes provide great hiding places to stalk prey from (and retreat to). But there’s clearly more going on here.

Thankfully, behavioral biologists and veterinarians have come up with a few other interesting explanations. In fact, when you look at all the evidence together, it could be that your cat may not just like boxes, he may need them.

Understanding the feline mind is notoriously difficult.Cats, after all, tend not to be the easiest test subjects. Still, there’s a sizable amount of behavioral research on cats who are, well, used for other kinds of research (i.e., lab cats). These studies—many of which focused on environmental enrichment—have been taking place for more than 50 years and they make one thing abundantly clear: Your fuzzy companion derives comfort and security from enclosed spaces.

This is likely true for a number of reasons, but for cats in these often stressful situations, a box or some other type of separate enclosure (within the enclosures they’re already in) can have a profound impact on both their behavior and physiology.

Ethologist1 Claudia Vinke of Utrecht University in the Netherlands is one of the latest researchers to study stress levels in shelter cats. Working with domestic cats in a Dutch animal shelter, Vinke provided hiding boxes for a group of newly arrived cats while depriving another group of them entirely. She found a significant difference in stress levels between cats that had the boxes and those that didn’t. In effect, the cats with boxes got used to their new surroundings faster, were far less stressed early on, and were more interested in interacting with humans.

It makes sense when you consider that the first reaction of nearly all cats to a stressful situation is to withdraw and hide. “Hiding is a behavioral strategy of the species to cope with environmental changes and stressors,” Vinke said in an email.

This is as true for cats in the wild as it is for those in your home. Only instead of retreating to tree tops, dens, or caves, yours may find comfort in a shoe box.

It’s also important to note that cats really suck at conflict resolution. To quote from The Domestic Cat: The Biology of its Behaviour, “Cats do not appear to develop conflict resolution strategies to the extent that more gregarious species do, so they may attempt to circumvent agonistic encounters by avoiding others or decreasing their activity.”

So rather than work things out, cats are more inclined to simply run away from their problems or avoid them altogether. A box, in this sense, can often represent a safe zone, a place where sources of anxiety, hostility, and unwanted attention simply disappear.

Of course the problem with these explanations is that they make box attraction seem like a symptom of a mal-adjusted, stressed out cats. I don’t know about you, but to me, Maru does not appear to be suffering from high levels of stress in the video below.

The ‘If it fits, I sits’ principle

Astute feline observers will note that in addition to boxes, many cats seem to pick other odd places to relax. Some curl up in a bathroom sink. Others prefershoes, bowls, shopping bags, coffee mugs, empty egg cartons, and other small, confined spaces.

Which brings us to the other reason your cat may like particularly small boxes (and other seemingly uncomfortable places): It’s friggin’ cold out.

According to a 2006 study by the National Research Council, the thermoneutral zone for a domestic cat is 86 to 97 degrees Fahrenheit. That’s the range of temperatures in which cats are “comfortable” and don’t have to generate extra heat to keep warm or expend metabolic energy on cooling. That range also happens to be 20 degrees higher than ours, which explains why it’s not unusual to see your neighbor’s cat sprawled out on the hot asphalt in the middle of a summer day, soaking in the sunlight.

It also explains why many cats may enjoy curling up in tiny cardboard boxes and other strange places. Corrugated cardboard is a great insulator and confined spaces force the cat to ball up or form some other impossible object, which in turn helps it to preserve body heat.

Indeed the same NRC study found that most cats’ housing areas are around 72 degrees Fahrenheit, a good 14 degrees colder than a domestic cat’s minimum thermoneutral temperature.

So there you have it: Boxes are insulating, stress-relieving, comfort zones—places where cats can hide, relax, sleep, and occasionally launch a sneak attack against the huge, unpredictable apes they live with.